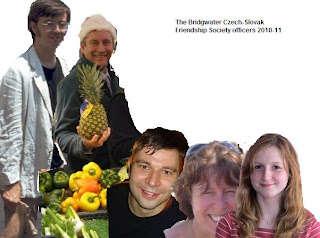 The Annual General meeting of the BRIDGWATER CZECH SLOVAK FRIENDSHIP SOCIETY will be held at 7p m on Wednesday 19th January 2011. The venue will be the Unity Club,Dampiet street.

Anyone who has been involved or would like to become involved is welcome to attend.

The secretary Brian Smedley will present a review of the years programme 2010-2011 run by Bridgwater International and a look forward to ideas for 2011. Kathy Pearce will present the years accounts.

The AGM will also seek to elect officers to run the organisation for the next 12 months. Our Chair, Marketa Weaving, will be standing down this year as she has moved out of the area.

ANNUAL GENERAL MEETING OF THE

ii)Secretary;- BRIAN SMEDLEY .;- will present a powerpoint of 2010 activities

7 Bridgwater Town Council rep;- to note that cllr DAVE LOVERIDGE would continue as our BTC rep until May 2011

8 Plans for 2011 season;-The secretary will present a programme for 2011 to be run by Bridgwater International

Posted by BRIDGWATER INTERNATIONAL at 02:07