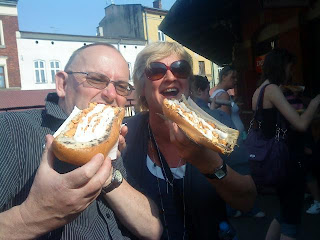 Students from Bridgwater College catering course spent a week in East Europe visiting Slovakian college, sharing cooking experiences and learning something about the local culture and people amidst the sunlit landscape of the High Tatra mountains.
Starting their journey in the Southern Polish city of Krakow the students stayed in the Kazimierz area - once the hub of Jewish Krakow. With the help of Polish teacher Karolina Tymochowicz, the group had a guided tou 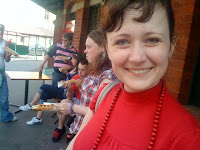 r of the city which included the famous market square and the Castle at Wawel next to the Vistula river. It was here that they visited the tomb of the recently buried Polish President Lech Kacynski who had died only the week before in the Katyn wood plane tradgedy. They were also told the legend of Smok the fire breathing dragon whose statue can be found at the entrance to his cave beneath the castle and next to the river.
The students also tried some Polish 'kanapke' - sandwich snacks, bought from the main square in Kazimierz.

In the evening the group crossed the river to visit a Polish restaurant situated very close to the Oskar Schindler Factory, where they sampled Polish cuisine and the next day they visited a synogogue in Kazimierz before heading off South to the Slovakian mountains.

In the still snow capped High Tatra mountains the students stayed in the town of Tatranska Lomnica , once a popular location during the years of Communism for Party-away-days (of a political kind). 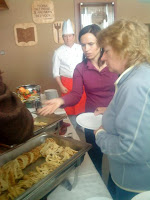 Wandering the mountain peaks and forests of the High Tatras proved enjoyable for the Brits, guided by Maria Salusova who gave a constant and informative commentary about Slovak life and history as they visited the recently opened Queen Elizabeth stone (following a recent visit by the British Monarch) and an Ice Cave which had until recently exhibited a nativity scene. 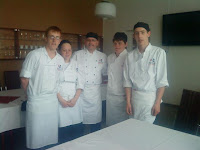 The students also visited the nearby town of Kezmarok where the Hotel Academy there welcomed them and invited them to a specially prepared dinner where they were attended to by their specialist trainee waiters and chefs.

The group topped off their visit with an exciting afternoon in Poprads new water theme park Aqua City and the evening listening (and dancing) to Gypsy music at the Zbrojovna Koliba back in Lomnica. Sadly, although the musicians managed to play some Beatles requests, they failed to do Motorhead or Michael Jackson. 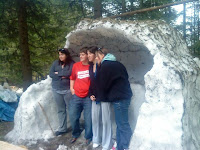 The trip leader Kevin Smokcum said "We have had some excellent feed back from the students and it is all very positive. The visit to both the catering sch 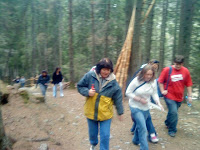 ools went particularly well, especially the first one, when we cooked. Overall, the week went well and students were engaged most of the time. The restaurants were a good experience to all, especially the final night at the Folk/Gypsy evening. That was a great end to the week."
Posted by BRIDGWATER INTERNATIONAL at 03:43