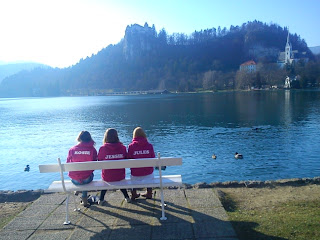 Richard Huish College 'Health & Social Care' students have travelled with us to the Czech Republic, Poland and Slovakia over the past few years. This year they chose the increasingly popular Slovenia for their annual fact finding mission.

Flying from Bristol to Venice - a couple of hours and a lovely rooftop panorama of the Alps then a swoop over the Venetian islands, they were whisked away by a waiting Slovenian coast to the border town of Koper. 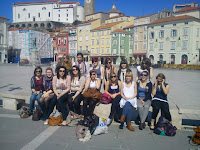 In Koper they stayed at the seafront Hotel Koper and had a programme organised by Grammar school teacher Ljuba Medak.

During the course of the trip the students were to meet with 3 seperate groups of Slovenian students of the same age and commented on how friendly they were. Friendships were made, information exchanged a 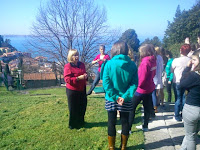 Travelling to the nearby hilltop hospital of Izola, the group were hosted by the Nursing students at Bolnica Izola and shown around the hospital (a good place to be ill as it has spectacular views over the Adriatic, so if you;re ever run over in Slovenia, ask the ambulance driver to take you there..it doesn;t matter which room - they're all good). Some students demonstrated how to repair broken arms, resusitate plastic dummies , mend plastic babies , take blood samples and change beds with patients still in them. 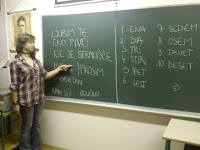 An evening of 'your country-my country' included presentations from both groups of students about each others schools, homes and cultures. The Slovenians gave the Brits a lesson in the Slovene language -which they took to remarkably quickly, before heading off to a Nightclub to try out some of the phrases. "Do you have an older brother?" , "Can I have what he's drinking" and "Which hotel was I staying at ??". 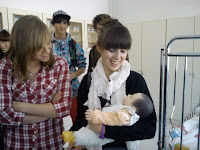 e children -who when asked to sing a song in English chose 'Frere Jacques'...but thats 3 year olds for you.

The group then went off to the Slovenian alps where they stayed at the picturesque lakeside town of Bled for the next 2 nights. Violeta and her family made the students very w 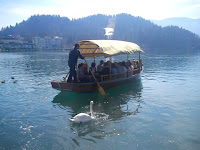 elcome at the Bledec Pension with their Slovenian home cooking and the lovable Slovenian roadworkers outside the Hostel made sure they woke up on time every morning with their lovable road digging. At one point they even put a rope up to stop people falling into the giant hole they'd dug.

During their time in Bled the group walked around the lake, took a 'Pletna' (boat) to the island and walked up to the castle perched on a steep craggy peak. 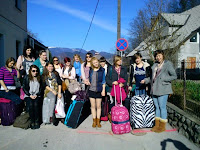 On their final day the students visited the nearby Jesenice school where the immaculate English accented Iris Kucina introduced them to their Slovenian counterparts where again they all got on like houses not on fire (which presumably better than houses on fire...)

Leaving the Julian Alps behind them they set off back for Italy where they spent an afternoon in Venice before flying on home after what they all agreed was their best trip so far. 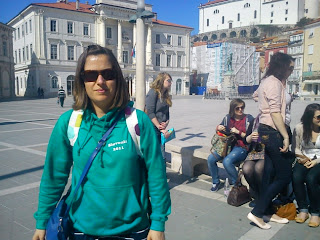 Posted by BRIDGWATER INTERNATIONAL at 08:06