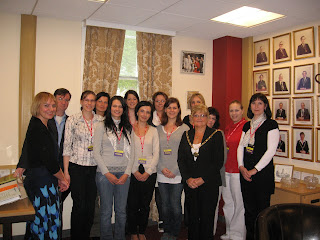 A successful link between communities in our two twin towns has been given a boost for the second year running with money from the European Social fund. Last year Dagmar Mega, from the Akropolis family centre in Uherske Hradiste arranged funding for Family centre workers in UH to come across to seehow things were done in Bridgwater. As a result of that first visit links were made with the Hamp Community Association and a second trip, funded by the European Social fund, was organised to further those links.

In September 2011 Dagmar brought across a further 10 Family centre and Youth club workers to Bridgwater and we organised a series of visits to similar family centres in our district.

The bulk of the programme was organised in conjunction with Les Riddle at the Re-Creation centre in Hamp whose volunteers prepared many of the meals for the group, and who involved them in community activities such as 'Community Computing' ,'Zumba', and even a 'Knit and Natter' session.

The Project generated some £500 for the Hamp Community Association and as a result of the programme and Hamps new link up with the YMCA a 3 -year Euro project has now been signed up to for 2012.
Posted by BRIDGWATER INTERNATIONAL at 11:11