SOMERSET STUDENTS IN CROATIA AND SLOVENIA 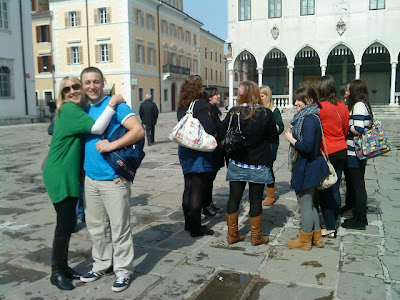 Somerset students from Tauntons Richard Huish College have visited the former Yugoslav Republics of Croatia and Slovenia on a comparative Sociology and Law study trip.

In Croatia the students stayed in the Port city of Pula where they linked up with the School of Art and Design and their progressive head teacher Davor Klimann. The 36 students and 5 staff stayed at the Luxury Hotel Pula, with its own private Adratic beach. Sadly however, uncharacteristic rain put a damper on their stay which also included visits to the 2000 year old Roman Amphitheatre, the Istrian archaelogical museum and the city fortifications which dated back to the time of Christ. 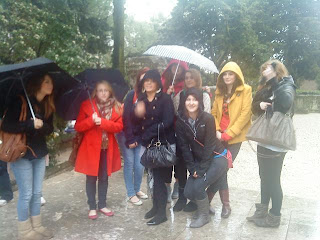 Irish writer James Joyce famously stayed in Pula for a while during which he wrote some of his book 'Ullysees'. Mr Klimann added .."however, he didn;t like it very much".

The group moved North for the second part of their tour and the weather surprisingly brightened up. In the Slovene coastal town of Koper (Capodistria) they were welcomed by students of the Koper Gymnasium who will be coming to Somerset in April and shown around their town. Afterwards they continued their journey to the beautiful Alpine mountain resort of Bled with its Glacial lake, Castle on a rocky peak and tasty cream cakes known as Kremsnitas. 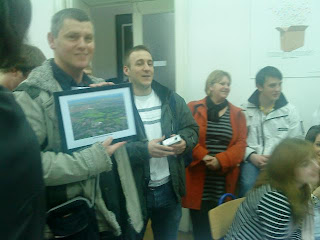 Their final day was spent with students at the sleepy market town of Radovljica where they did a presentation on Somerset life and England in general after being given a fascinating lecture on the changes in Slovenia from Yugoslavia to present days by tour operator Janez Medja. 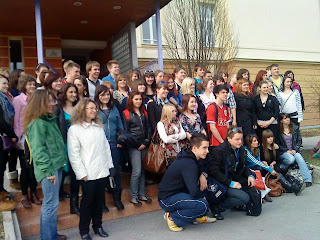 Photo;- (Left) Slovenian and Somerset students on the Steps of The Economic school in Radovljica

On April 14 a group of Slovenian students from Koper will visit Somerset for 5 days and link up with the Richard Huish school whilst in the county. 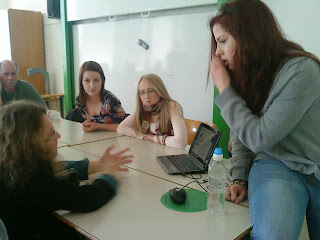 On Friday April 16 we will hold another 'International Night' at the Unity Club in Bridgwater and sepcially have a Slovenian theme. The students in return will bring samples of Slovenian music and food to sample.