Slovenian visitors who have just spent a week in Somerset hardly expected their first ever trip to our County to end with a rescue mission and a 30 hours journey home by land and sea - but thats what happened. 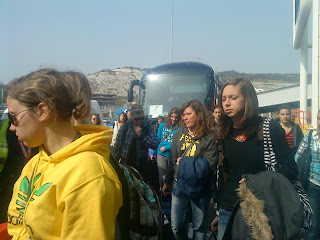 The students, from the high school in the Adriatic town of Koper , came to Bridgwater as guests of Bridgwater International. During their stay they were received by the Mayor Ken Richards, held a Slovenian Night at the Bridgwater Labour club with food,drink and music from their country and linked up with the Richard Huish school in Taunton who ahd recently visited them intheir own country. They also toured 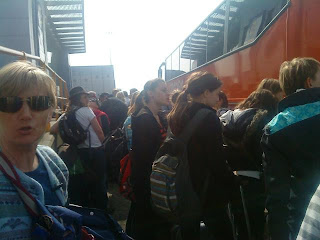 around the county to see all the famous sites including Glastonbury Abbey, Wells cathedral and Cheddar Gorge. Other highlights of their trip included a day orienteering on the Quantocks and a day trip to the Dorset coast.
Group organiser Brian Smedley said "Unfortunately by the end of their trip it became clear that they would not be able to fly home as planned due to the closure of all UK airports and cancellation of flights including theirs. We spent most of saturday trying to find what to do but not a single phone gave us anything other than an ansaphone message from Ferry companies, railservices or coach companies. In the end we decided to drive them to Dover to 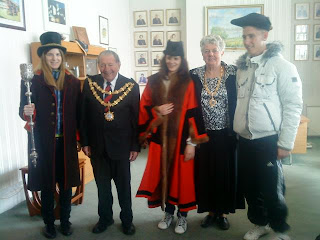 join the throng of people queuing to get on the Ferries as foot passengers and arrange for a Slovenian coach to make the 14 hour journey from the Balkans up to the French coast. Everything went fine, myself and Nigel Carter drove them
down at short notice, SeaFrance agreed to put them on the first ferry -although it was almost full and within minutes if leaving and even allowed us to drive them right up to the ferries gangway! The Slovenians were overjoyed and were singing as they boarded the ferry. The last we heard was they;d met the Slovenian coach as scheduled in Calais and are now on their way home to the former Yugo 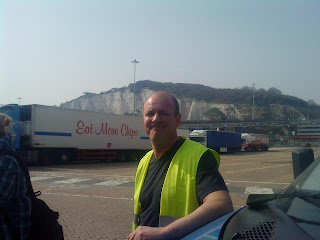 slavia" Ljuba Medak, the group leader, thanked Bridgwater International for the Rescue Mission and praised Somerset people for their kindness during their stay and vowed to return and to develop further Friendship Links

Saturday 12.00;- Ryanair cancels all flights including the Slovenians flight to Trieste from Birmingham scheduled for Sunday at 2pm. It is decided that the only solution is to get a Slovenian coach to drive to the French coast and for Bridgwater International to get the Slovenians to Calais. Brian phones SeaFrance. Ansaphone message tells us our call is valuable to them and that we should to hold. 4 Hours later it still does. The SeaFrance website tells us that "It is not possible to book as foot passengers, people should 'just turn up at the port' to join the queue to the first available ferry".

14.00 Driving the Slovenians to London to put them on a coach or train to Calais thus guaranteeing their journey is considered. An ansaphone message tells us "The Eurostar office is closed until monday" a visit to (as it happens) 'Weymouth' railway station informs us (in person) "We can't book Eurostar. Oh, and we can't book any British trains to Dover , you'll just have to turn up at Victoria and queue for the first one. If theres a place".

1500 A Slovenian coach leaves Istria and heads for the North European coast. Bridgwater International decides to drive the group to Dover and 'assess the situation on arrival'. Echoing the Dunkirk Spirit of Churchill and Dan Snow, Cllr Smedley calls for volunteers to urgently come to the aid of the stranded Slovenians and drive the second minibus. Most people are either washing their hair or pretending their mobile phone doesn't work.
16.45 The Volcanic eruption causes more chaos as Gillingham beat Leeds 3.2. Cllr Smedley fails to get a wifi signal on Chesil Beach.

19.35 Bridgwater driver Nigel Carter offers to give up his Sunday and child minding duties to drive the group to Dover. The child is taken into care by Social Services. 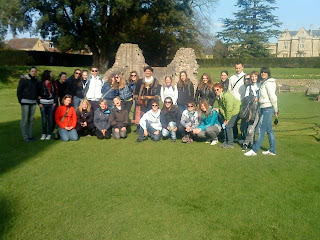 Sunday;- 0900 2 minibusses set off for Dover . They stop at Stonehenge so as not
to miss a touristic opportunity. Here they are entertained by local nutter Arthur Pendragon who is standing for parliament on the twin policy of 'Free public access to the stones' and 'being the rightful King of England'.
1430 the group arrives at Seafrance terminal Dover and pushes to the front of the vast queue as Cllr Smedley shouts 'Let me through I'm pregnant'.

1450 SeaFrance receptionist 'Julie' is at the desk for the first time and has never taken a 'Group Booking'. She is persuaded by the curvaceous Cllr Clooney to fit them on the ferry leaving in 10 minutes otherwise he will turn into a pumpkin. With the change already visible, Julie assigns 'Mister James' to rush the group through the ferry port as an 'Emergency' case. Julie is later sacked (probably). Mister James proves that all is needed is a 'yellow jacket' an 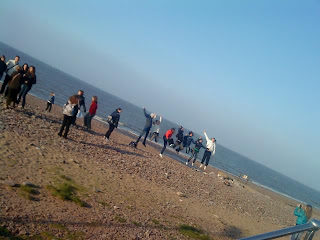 d you can drive straight through customs, ticket checks and intimate body searches without a single gear change.
1500 the Slovenians board the SeaFrance ship L'infloatible and head for Calais to meet the waiting Slovenian coach and head across Europe and home.

1505 Cllr Smedley and Nigel are arrested by Dover Police for 'looking a bit foreign'.

(Left) Jumping for joy on Minehead beach
Posted by BRIDGWATER INTERNATIONAL at 14:50