MAKING A SPLASH IN THE MED 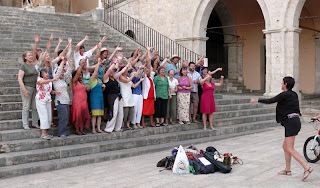 Bridgwater's VOICE OF THE PEOPLE choir have just returned from a succesful 4 days tour of the Lazio region of Italy which included the town of Priverno - twinned with Uherske Hradiste , and where they sang on the steps of the Town hall, Pontinia where they sung in the Fellini Theatre with the Pontinia Choir, the beach resort of Sabaudia where they sang in the sea and the city of Rome- where they probably sang in the Metro.

The choir, led by natural voice practitioner Yvette Staellens, based at Bri 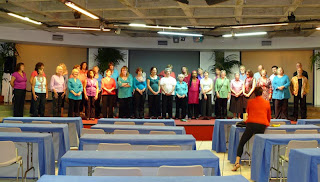 dgwater Arts Centre, flew from Bristol to Rome 44 strong and out again with a massive security presence (although this might have been due to Amanda Know flying out of the same airport at the same time..).

Staying at the beach hotel of Oasa di Kufra the group quickly made friends with the other guests who they serenaded to sleep each night and awoke each morning with a gentle refrain. Along with some George Formby style ukelele playing that wasn't part of their usual set....

The Italian summer had stretched to October and the warm evenings lent themselves to a perfect setting when they met up with Paola SanGiorgios Pontinia choir and both choirs sang to each other on the stage of the Fellini Theatre and then in the bar afterwards. Meanwhile the ukelele playing continued into the streets to 'entertain' the local Italians attempting to watch the Juventus v Milan football match on the big screen. 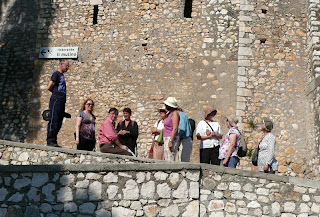 e Lazio landscape from ahigh including the entire Pontine marshes drained by Il Duce himself back in the 30's to create a series of Fascist new towns - ideal locations for the choir to sing their songs of 'no more Nations, give us peace on earth'. And of course for us to remember that champion of the working class George Formby with a little bit more ukelele magic.

The final day and the group visited the town of Priverno where an impromptu show on the steps of the town hall in the piazza brought an excited audience of bouncing ,cycling and 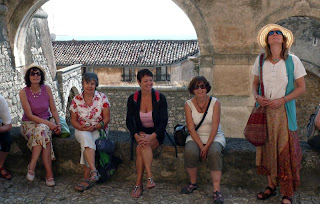 footballing kids into action who joined in while throngs of people lined the narrow streets as the singers wended their way out of the town singing as they went 'adios amigos' -which surely left the locals wondering 'what are these spanish people doing here??'. ..until they were reassured that in fact they were Brits....assumedly by the faint twang of a ukelele being bashed over a choristers head...

This is the 4th tour the Voice of the People have done with Bridgwater International and long may they continue.
Posted by BRIDGWATER INTERNATIONAL at 15:17