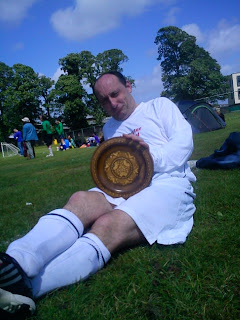 Bridgwater International's multi-National football team (there was a Slovak bloke playing for them) have lost their 23 month unbeaten record at Bristol's prestigious 'Sandino tournament' with a solitary draw against Red Star Bedminster followed in rapid succession by 4 consecutive defeats.

The team, who had to hand back their 'Sandino Trophy' - a sort of handcrafted wooden plate strangely containing the remnants of a meal of egg and chips, were upbeat in their post match comments.

Richard,(left) a violent centre back in the style of Norman Hunter, 'Chopper Harris' or the Boston Strangler, said "The weather had something to do with it. Whenever theres 'weathe 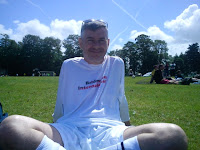 r' we never play our best."
Steve (right) who scored 4 of the teams 3 goals, said "The opponents was a bunch of cheats man, not only did they pick better players but every time we scored a goal they scored More than us!" 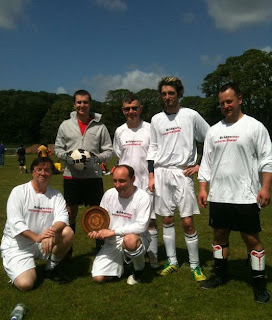 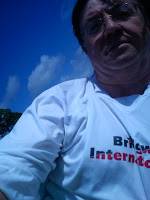